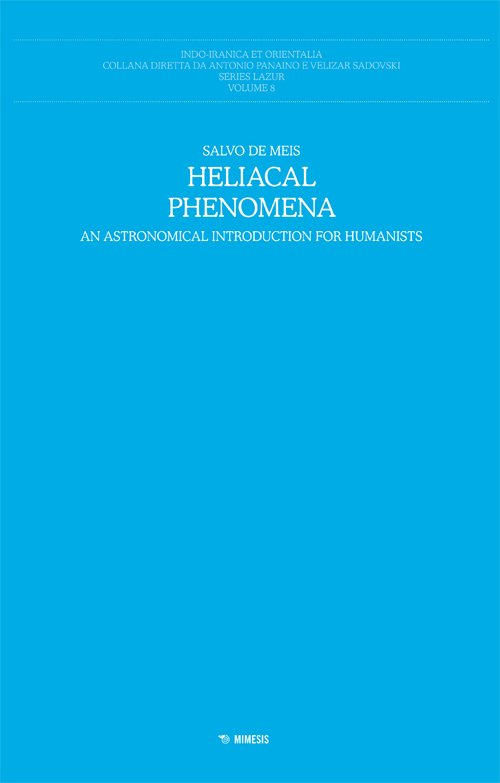 An Astronomical Introduction for Humanists

An Astronomical Introduction for Humanists

Heliacal Phenomena is a parallel to Salvo De Meis’ Eclipses, being another astronomical introduction for Humanists. In such an extremely wide field, both for theoretical aspects and for the number of documents that have accumulated within centuries, the essentials of theory and documentation have been carefully chosen and the events have been recomputed and compared to previous research. The aim is at giving to Humanists a general view on the importance of these phenomena from the points of view of history, literature, astronomy, that in the past were diffused in histories, poems, and treatises now often unavailable. It is an invitation to students and scholars to consider this subject, that was so useful to science, agriculture, peoples, for its many uses, from knowing the seasons of seeding to navigation, the aspect of the sky related to them, and the legacy left to humanity by the ancient texts from Babylon, China, Greece, Rome or the Academies and Scientists until the present time. That is, from the epochs in which stars were gods, to the modern applications of high speed astronomical photometry. Heliacal Phenomena will be useful as a compendium of information, from which to be able to develop further studies.

Salvo De Meis is a well-known scholar in the field of celestial mechanics and historical astronomy. He is the author of many articles and books, among which one may recall Eclipses, Astronomical Amusements (papers in honor of J. Meeus, edited with F. Bònoli and A. Panaino), Babylonian Eclipse Observations (with P.J. Huber) and the yearly Almanacco astronomico e nautico (with J. Meeus, now discontinued) which guided so many generations of astronomers and amateurs in the ever-changing spectacle of the sky. The International Astronomical Union named the asteroid 5589 De Meis after him.