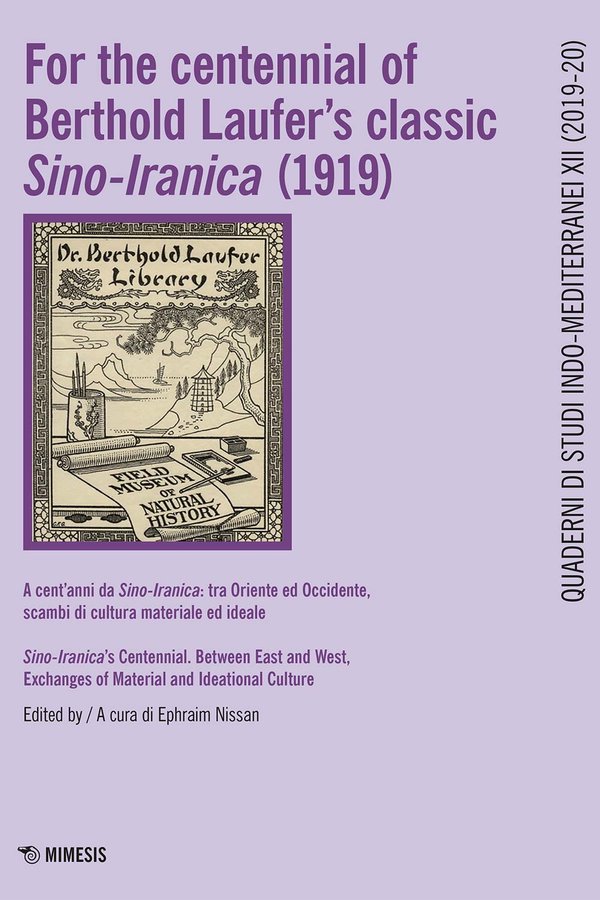 Sino-Iranica’s Centennial. Between East and West, Exchanges of Material and Ideational Culture

Sino-Iranica’s Centennial. Between East and West, Exchanges of Material and Ideational Culture

The year 1919 saw the publication of a seminal book, Sino-Iranica, by the German-born Chicagoan Sinologist Berthold Laufer. It is an admirable book that keeps on giving, and is still cited in scholarly works on disparate subjects. It traces how items of material culture, typically from botany, were exported between Iran (and Western Asia), and China. We begin this centennial volume by illustrating the breadth of the impact of Sino-Iranica, and elaborating on some themes in long-distance cultural contacts in the Eurasian continental mass throughout history. Some of the chapters are concerned with items of material culture, and their names: one chapter discusses the terminology of melons and watermelons between the Middle East, Iran and Central Asia. This focus on botany is germane to that focus in Berthold Laufer’s Sino-Iranica. One of the authors discusses alfalfa and horses in China. A chapter from Yale updates what Laufer wrote about the khutu (walrus tusk) in trade with China, circa 1000 CE; so does another chapter, also on arctic ivory. Another author writes about the use of a tree resin as incense in relation to astral-magical traditions in medieval China. Iran and China are conjoined in the discussion of astrology in another chapter. As indeed, the scope of this volume is not confined to material culture; it also forays into ideational exchanges, be that in religion (Mithraism, Manichaeism, Zoroastrianism), religious experience (ecstasy), or culture heroes or figurative motifs. Manichaeism, which first spread among Aramaic-speaking Christians in Mesopotamia, spread into the Roman Empire (where it was never welcomed the way Mithraism was, as Mithraism subserved imperial propaganda) as far west as the Maghreb, and as far east as China’s coasts (where it became assimilated into Buddhism), but only in the Uyghur Empire was Manichaeism the state religion; according to a hypothesis, for Christian early monasticism there was the model of Manichaean monasticism, itself emulating a Buddhist model. As for culture heroes: Romulus and Remus in Byzantine imagery reached Inner Asia; and they are sporadically mentioned in rabbinic homiletics. Gesar / Kesar, the warrior king of Tibetan and Mongolian epic narratives (now residing, for Tibetan believers, in Shambhala, a hidden realm from where he will come back to save humanity and Buddhism: tsarist Russia portrayed itself to the Lamaist world as this latter-day Northern Shambhala, and the myth also fascinated some 20th-century Westerner occultists), was so named, according to some scholars, because of the prestige of the Byzantine Caesar / Kaisar, through a Turkic conduit in Central Asia where the title was recycled (perhaps starting when the Byzantine emperor Heraclius wooed the King of the Khazars by crowning him, like in a caesarial proclamation, and giving him the hand of his daughter). The outskirts of Tibet are the setting for another chapter, in which for the first time, the identification of the narrative of the Life of the Buddha in the early Ladakhi temple of Mangyu is provided; the influence is traced of Iranicate material culture, social interaction and signs of prestige in these Buddhist paintings and on the art historical, social and political context of this phenomenon in the Western Trans-Himalayas around 1200. A narrative from the Babylonian Talmud, pertaining to compassion towards all living creatures and liberation from suffering, may have been influenced by the Zoroastrian–Manichaean debate on the matter, or else by Buddhist ideas via Manichaean channels. The Indian world, and possible interaction with cultures to the west, are again the context for a chapter on Porphyry, vegetarianism, and Sri Lankan culture. Another chapter discusses how the Pamir sits within the mountain ranges of Inner Asia, and is a geopolitical hub. Yet another chapter is concerned with relations between Alania (a medieval power in the Caucasus), and China.